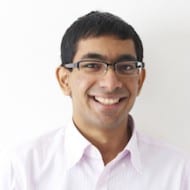 Tushar is the COO and co-founder of Voyagin. As a third culture kid, he was born in India, grew up in Tokyo, went to college in NYC, now lives in Singapore, and increasingly spends a great amount of time in Bali. For most people, “Where is home?” would be a simple question, but he loves the fact that it’s so complicated. Traveling to new places has been in his blood since he was born and whenever he’s in a place for too long, he’s tempted to scratch the travel itch.

Tushar is a graduate of Columbia University and an Indian-born tech / startup / travel geek and entrepreneur from Japan. Prior to moving back to Asia, Tushar was part of the New York City startup scene, first at Social Bicycles and then at Producteev (acquired by Jive).