A Baby Tern’s First Steps: How I Learnt To Market An Event September 1, 2016

As an intern with no previous experience, the idea of marketing an event was incredibly daunting; especially seeing as Tern was the first travel careers event of its kind.

Named after the Arctic Tern, whose migratory journey is long and zig-zag in nature, the one-day conference took flight on August 27 at the Novotel Clarke Quay, Singapore and I was lucky enough to be part of the core startup team and entrusted with the marketing of it.

The initial panic of coming to grips with my responsibilities (running the social media and creating web content) left me with a fair dose of jealousy towards my friends whose internships consisted of making coffee, photocopying, and general grunt-work. I thought they had almost nothing to lose because they didn’t have very far to fall, but I soon realised that having higher stakes, and no safety net, meant I had everywhere to fly.

Being thrown out of the nest may have been the best thing for me, and anyone. After the initial crippling self-doubt, I had no option but to crash or glide. I figured even being (silently) conceited was still a better option than allowing my lack of confidence to let me sink, so I adopted a WWCD approach (What Would Caitlin Do).

This forced me to do my research, get a game plan, and go. Because more often than not, the only way you’ll learn properly is to do it along the way. 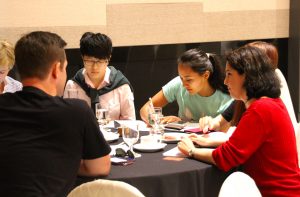 As a millennial, I had relatively few doubts about my personal social media capabilities. However, being on the other end of the equation, although more challenging, was far more interconnected than I had anticipated.

Given that Tern was largely targeted at young professionals and fellow university students, I realised the importance of identifying my own behaviour on social media, and what made me ‘tick’ when it came to events on Facebook.

Listing everything about Tern that made me want to get involved with the project made me realise that this was no different to why potential delegates would want to attend. From the inside or the outside, Tern still sounded like a godsend for industry newbies, or anyone looking for an industry tasting-menu.

With the combination of its trailblazing, revered speakers, and the vast networking opportunities it presented, I couldn’t imagine how anybody could turn it down. This also meant I couldn’t drop the ball (or egg). What this also showed me about marketing was how useful it is to realise that you are as much of a customer as everybody else, and how important it is to use it to your advantage.

Although ‘working on a whim’ initially sounded like a dangerous approach to me, marketing Tern highlighted just how much the gamble can pay off. As a creative person, my urge to do something visually appealing, in this case simple graphics with quotes from each speaker, seemed slightly selfish. I saw it in the context of giving myself a fun project, rather than content creation. 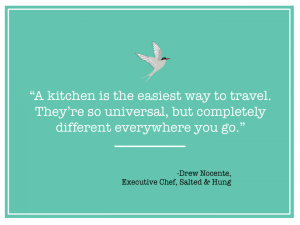 (A quote image I created for Tern’s social media marketing)

But without realising, I had actually created much more digestible social media content, resulting in an influx of post engagement. Even though I hadn’t fully connected the dots between how its appeal to speakers would translate into a wider engagement within their own circles (yet), it emphasised how far trial and error can really get you. Not to mention, I noticed how the more fun and creativity I had within my concepts, the more successful my strategies were. Essentially, I found that when it boils down to it, a lot of marketing is just trying multiple strategies, whilst always paying attention to which works best, and repeating it. 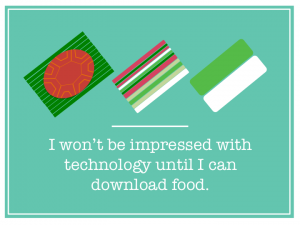 (Another procrastination strategy that paid off: After struggling to find a decent image of local foods to use on the “break/lunch slides”, I decided to create my own graphics.)

In the end, we ended up with close to 150 delegates (we had hoped for 100-120), 104 of whom signed up online and the rest by email orders or walk-ins. More than that, we were happy with the quality and diversity of the audience.

All in all, marketing Tern helped me find my wings, and gave me the confidence to actually use them. With any luck, it won’t be my last flight.